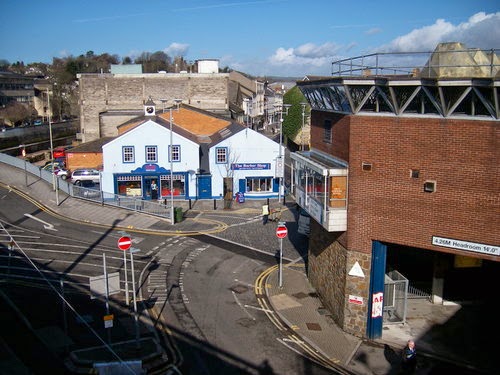 Just as being “educated at a South Wales comprehensive school” hasn’t prevented anyone becoming an ex-Cabinet Secretary or First Minister, it hasn’t prevented me rising to the heady heights of blogger. My attentions turn to the town again, and something of a ongoing mystery.

Since many regeneration schemes have often fallen short of their stated aims, Vibrant and Viable Places has three key goals it expects each bid to fulfil : improving the economy, improving skills & community self-esteem and improving the environment, housing and health.

Back in November 2013 (doc), BCBC presumed only 5 or 6 bids would be awarded, which would be significant as each bid would be worth up to £18million.

In the end, 11 grants were awarded and BCBC received just under £6million – 40% of what they wanted. £6million isn’t that much money when you consider the current regeneration works have cost £9million. A major face lift to Bridgend town centre would probably need 10 times these sums plus significant private investment.

In the aftermath of the successful bid, however, there’s been no idea as to what exactly BCBC intend to do with the money. I suspect that’s because BCBC ended up with less money than they anticipated and  need to change their original plans as a result. There’s plenty of rumours flying around, but nothing concrete.

Suzy Davies AM (Con, South Wales West) has stated a few times in the Glamorgan Gazette that the uncertainty and rumours are giving some town centre businesses the jitters – especially Bridgend market stall traders. She also had a Freedom of Information request turned down due to that much coveted (and all too familiar) excuse for lack of transparency in Welsh local government: “commercial sensitivity”.

The current regeneration works are close to completion – I’ll return to that in a few weeks time. They’ve also proven unpopular with some businesspeople due to the traffic disruption. Freya Sykes of Riley’s Sweets has been a vocal critic of the disruption caused by the Nolton Street regeneration, holding a street party to celebrate the completion of works last weekend.

I don’t want to contribute to any worries, just let people know what I’m hearing so far, probably just confirming what everyone else knows anyway.

Rumour 1: The Police Station – The police station is moving to a modern custody suite on Bridgend Industrial Estate, while police officers will soon be based out of the Civic Centre on Angel Street. So the current police station site on Cheapside will be vacant in the short-term. There has been talk of BCBC buying the police station, but that was dependant on the success of the bid. As BCBC only got half of the money they wanted, I would be surprised if they went through with that. It’s unclear what would go there, but residential development has been mooted.

Rumour 2: The Rhiw Car Park – This is the rumour causing concern to Bridgend Market traders, as it could cause further significant disruption. There are conflicting stories about what might happen here. One is that the top two levels might be converted into apartments. The other is that the whole thing could be demolished, and then rebuilt with a department store facing Wilkinsons – something that’s been talked about at the site for the best part of two decades but has never come close to happening. It would also cost a lot more than £6million.

Rumour 3: Brackla Street Centre Redevelopment (Phase 2) – It was recently given an upgrade, which included refurbished stores and a general tidying up. There is/was planning permission for an apartment block and new entrance to face ASDA – including two much-needed stores with large floorspaces – but the permission might’ve expired now. TK Maxx, H&M and Matalan were rumoured to have been interested in the past, but I’m not sure if that’s still the case. The money could be used to resurrect that project.

Rumour 4: Bunging Marks & Spencer, Next and/or Debenhams – This could be linked to either one of the three above rumours. One of the big weaknesses in Bridgend town centre, which lots of people have been saying for years including myself, is a lack of a big name department store that reflects the relative wealth of the Bridgend retail catchment area. The three retailers listed have long had “aspirations” of opening a store in Bridgend town centre, but instead opted for larger big box outlets at one of the retail parks, or in the case of M&S, an outlet at The Pines.

Rumour 5: A statue of Carwyn Jones – Cast in polished bronze, the statue will be at least 600ft tall, aiming to be the first you see as you approach Bridgend from any direction. In addition to having one of those flashing red lights to stop planes crashing into it, it’ll be positioned so that no matter what angle you look at it from, on a hot day it’ll reflect the sun’s light into your eyes, burning a Welsh Labour logo into your retinas, forcing all to bow and avert their gaze when approaching it.

That last one could be made up, but it’s about as reliable as the other rumours (for now). Of those rumours I’d guess a retail & housing development at the police station would be the most likely, especially if it becomes vacant. We’ll have to wait and see.