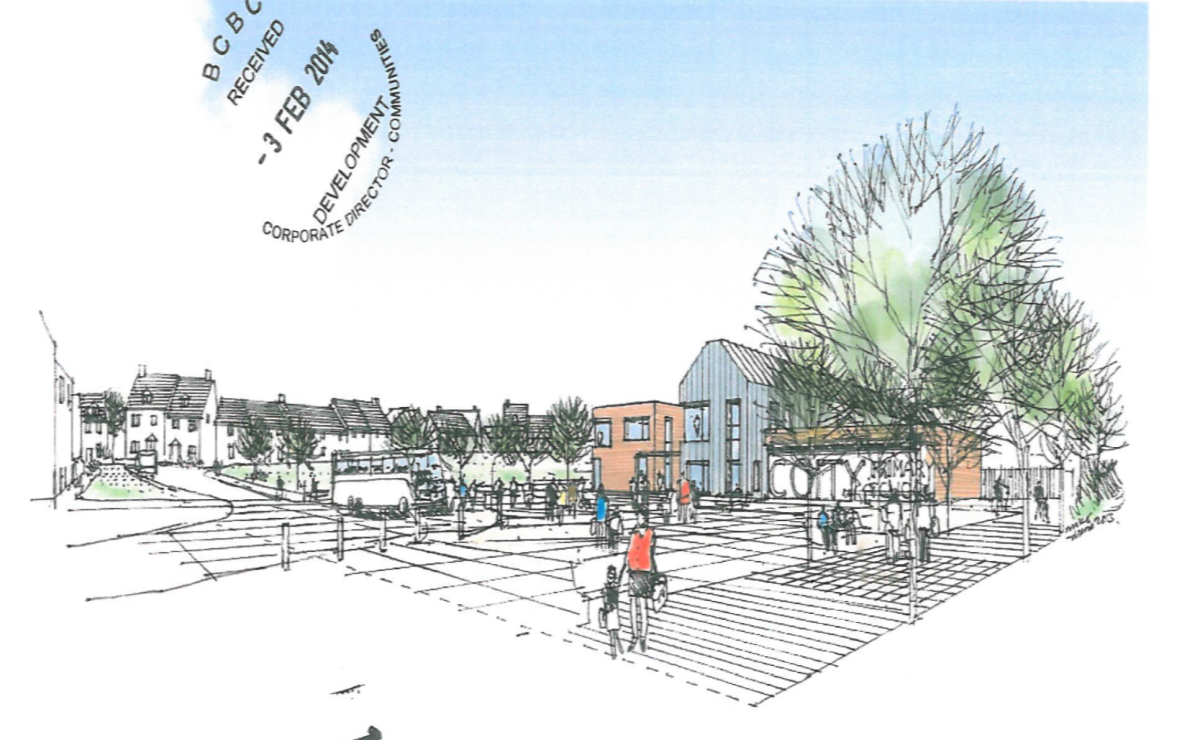 An important milestone in the Parc Derwen new village to the north east of Bridgend has been reached, with a formal planning application submitted for a new primary school to replace nearby Coety Primary. All the information is available here.

As I covered back in 2012, and last June, the current capacity of Coety Primary school is 134 pupils, and it’s oversubscribed as a result of new residents from Parc Derwen. The new school will have room for an extra 330 pupils – said to be more than enough to cover Parc Derwen, Coity and presumably  the new housing developments near Brackla Industrial Estate.

The school will be located in the northern half of the village, and will be built around a public plaza which will include coach parking. The school itself appears to have wood cladding and looks a little similar to St Luke’s School in Wolverhampton (pictured above).

The building has an indicative “excellent” BREEAM rating, making it potentially one of the most environmentally-friendly schools in the county, if not the whole of Wales.

It’ll be a two-story building with classrooms, a hall, community facilities (i.e. meeting rooms) and staff facilities built around a central circulation area. Toilets will be built between the classrooms so there’s no long walks to a central location – something the Welsh Government have worked on before (see, these things do matter).

There’ll also be a special food science classroom, IT room, SEN unit and roof terrace – because of the elevation and direction it’s likely the terrace will have quite nice views (when it’s clear).

Playing fields and a multi-use games area will be provided to the south of the school once 750 homes are constructed, with the proposed school’s changing rooms available for any potential future sports teams using the playing fields.

The target opening date is October 2015 and – presuming there’s a continuation of current catchment areas – the school will feed into Pencoed Comprehensive. It’s worth taking note of the possible future changes to school bus provision there.

The name could be indicative at the moment, but might cause controversy.

While it’s plainly obvious Parc Derwen and Coity form part of Bridgend’s urban area, when Parc Derwen was first proposed, Coity residents were concerned that it would impinge on the village’s unique identity, despite the provision of a buffer zone.Taking the old school’s name will no doubt fuel those concerns.

However, the plans leave me feeling a little jealous. I hope some kids realise how lucky they are they no longer have to attend the Edwardian relics we still – in some places – call schools.