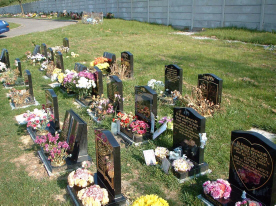 Here’s another round-up of some of the items of the agenda for Bridgend Council’s (BCBC) cabinet at their meeting tomorrow.

In addition, BCBC councillors are expected to pass the 2017-18 budget (details here) on Wednesday (1st March).

For those of you who are wondering, I intend to start coverage of the 2017 local elections (at a Welsh level and Bridgend level) at the end of March.

Dying is bloody expensive. What makes matters worse is if you’re a parent burying a young child. Fortunately that doesn’t happen too often, but the costs of burial can add to the heartache.

BCBC’s cabinet are being recommended to scrap burial charges/interment fees for the recently deceased aged 16-and-under. At the moment under-12s can be buried for free in Bridgend’s cemeteries with the only charges applying for a headstone and – if not buried in Laleston Cemetery – an Exclusive Right of Burial (EROB) charge.

However, charges will remain for multiple burials on a single plot (i.e. a child and one or two parents). Also, an EROB of £1,226 will continue to apply to child burials anywhere other than the children’s section at Laleston Cemetery (which will remain exempt from EROB).

None of these changes apply to Coychurch Crematorium, which already provides free cremation for under-16s at weekday funerals.

It’s not expected that the changes would place any significant financial burden on the council due to the low number of child burials, with any shortfalls being met from existing budgets.

Bridges into Work to be extended (pdf)

Bridges into Work is an EU-backed employment scheme run by five councils across south east Wales. It aims to help long-term unemployed people aged over-25 who live outside Communities First areas either into a job or training.

The second phase has, however, been beset with problems including a 4 month delay in starting. It’s also under-performed against targets with only around 250 people being registered on the scheme (I think that’s Bridgend only, or seriously hope so based on these numbers) and only 28 people having actually found a job or job placement.

An application has been made to the Wales European Funding Office (WEFO) to extend the scheme until April 2020 (it was originally to end in March 2018) to maximise EU funding before Brexit. However, the report suggests that if targets aren’t met by the end of 2017 (there’s confidence they will be) WEFO may pull the plug.

….and many still scratch their heads and wonder why Wales voted Leave.

In 2012, the Berwyn Centre in Nantymoel was closed (and eventually demolished) by BCBC. £200,000 was set aside by the council in capital funding for a replacement, and BCBC decided to work with Ogmore Valley Community Council as a community partner who would, in turn, work with community groups to come up with a plan.

They were originally given until 2014 to come up with a plan, but missed the deadline. The deadline was extended to March 2016, then extended again until 31st March 2017.

Despite bringing in the Wales Cooperative Centre to work with the community and come up with an alternative, no firm business case has been developed with the deadline set to be missed yet again.

An inital business plan to develop Nantymoel Boys & Girls Club as the Berwyn Centre replacement has been submitted, but issues remain over governance, required building works and finance.

BCBC’s cabinet have been recommended to extend the deadline until 31st March 2018. But there are fears momentum on the project could be lost, with guarded hints this will be the Ogmore Valley’s final chance to put together a plan before BCBC decide to pull the funding – depending on who wins May’s election, presumably.

BCBC are in the process of a Community Asset Transfer programme. In short, they intend to transfer ownership and running costs of certain buildings – mainly community centres – to town and community councils to save themselves money.

In 2016-17, BCBC doubled the amount of capital funding made available to town and community councils to £100,000, mainly to support the community asset transfer programme.

Due to serious long-standing building maintenance issues, Brackla Community Council applied for £23,500 to replace boilers at Brackla Community Centre, a move said to be fundamental to the centre’s long-term sustainability. However, the decision was deferred as BCBC has already transferred control of the centre, including repairs, to Brackla so it “wasn’t their problem”.

Cornelly Community Council applied for £40,500 to create a “gateway” with artworks along a cycle route.

As Brackla Community Council have demonstrated they’ve already spend significant sums of money on improving the community centre since the transfer – and that the building issues pre-date the transfer itself – BCBC are recommending a “one off” payment of the remaining £9,500 in the capital fund towards the cost of the new boilers, with Brackla Community Council paying for the rest.

Cornelly Community Council have, in shorthand, been told to “try again next year” and come up with less-ambitious proposals which, on the whole, is a fair point.