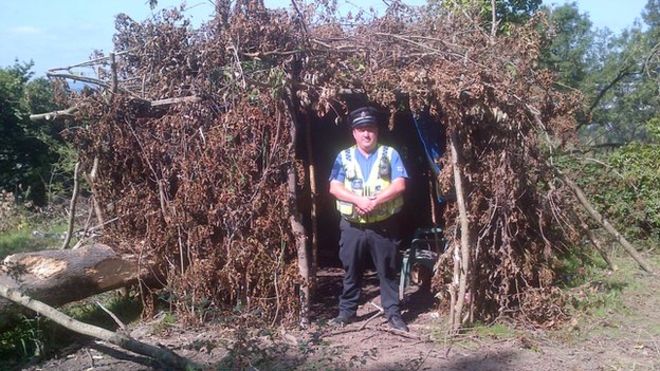 Strange goings on have been reported in woodland to the north of Brackla.

In September, following reports of people coming and going from the woods at irregular intervals, the police investigated and uncovered a camouflaged “hut” made out of branches, which was being used to conduct drug deals.

Possessing carpentry skills that would’ve done our Celtic ancestors proud, the craftsmen even went through the trouble of constructing a makeshift workbench.

I know this won’t make me too popular, but in its own way the hut shows some initiative on the part of whomever made it. Clearly they’ve spent a lot of time making it and it’s also carefully constructed from sustainable locally-sourced materials (heh).

At least the dealers have had the “courtesy” not to hawk their wares in public or on the streets and have made a conscious effort to keep out of the way; the problem there being that the woods are very close to family housing and both Archdeacon John Lewis Primary and Ysgol Gynradd Gymraeg Bro Ogwr.

In the last few weeks it was reported in the Glamorgan Gazette, via a local dog walking group, that the dealers are back. This time they’ve taken more precautions by creating a number of nasty looking “traps” around their new hut, which judging by the photos overlooks the Brackla Meadows estate.

This isn’t a new problem, trust me.

When I were t’lad, the whole area of what we now call the Brackla Meadows estate used to consist of abandoned buildings, rubble, streams, old railway workings and various artifacts which we always called “mines”but in reality were probably part of lighting columns or railway signals.

To crown that off there were what’s known locally as “The 8X’s” – a series of tunnels under Brackla which were originally used to store munitions from the Bridgend Arsenal.

Two of them (8 X’s 3 & 4, I think) were converted into the Regional Government Headquarters (RGHQ) for Wales during the Cold War and where Wales – or what’s left of it – would’ve been “governed” from in the event of a nuclear attack. The whole area was reportedly under heavy security but that didn’t stop any of us mucking about.

Clearly that problem hasn’t gone away. With the forest being in an increasing state of abandonment, it’s becoming a magnet for anti-social behaviour. It’s relatively secluded and there’s little if any passing foot traffic – I think only one official public footpath crosses the site and that’s overgrown and hardly ever used.

South Wales Fire Service have also put up posters in the area asking for information on a number of arsons. Needless to say, if someone deliberately started a fire in the woodland, it would be potentially deadly due to the close proximity to homes in Highfields, Maes Talcen and Maes Dewi Pritchard. 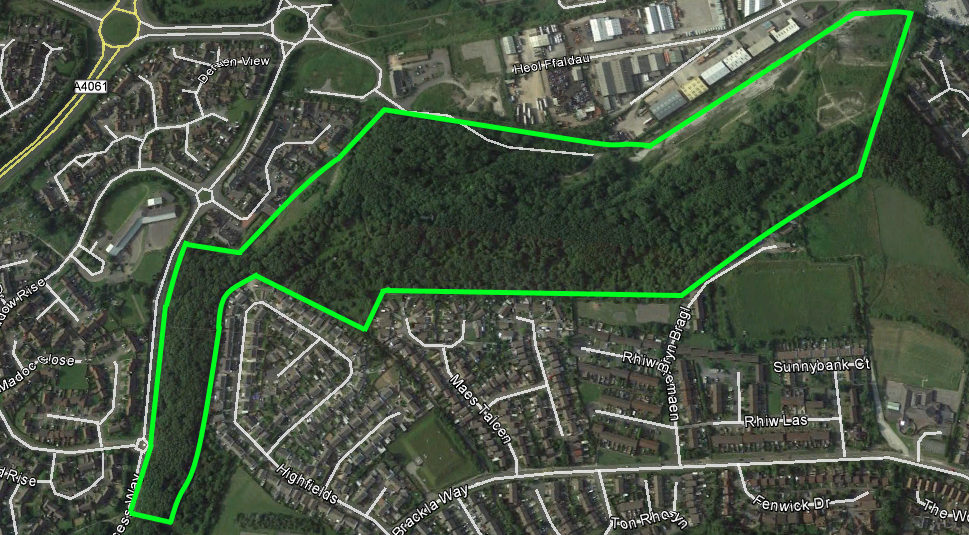 The council will promote the provision of accessible natural green space (including public open space) wherever suitable opportunities arise. In this respect, the following areas are specifically allocated :

If the woodlands are being actively blocked off by anti-social behaviour or poor maintenance, then it contravenes the LDP, surely?

Whose responsibility is it?

The responsibility for cleaning up the forest will ultimately rest with the landowners, but that’s a complicated issue.

First of all, it’s believed the Ministry of Defence still own it. The nuclear bunkers are still fenced off and regularly maintained with everything inside reportedly still in working order, plus there are other assets in the area such as radio towers.

Secondly, the above might not be true. As far as I know the bunkers were sold off privately in the mid 1990s and that’s why they’re still maintained. An episode of Doctor Who was filmed there and posts on various online forums suggest they’re also used for secure storage. Even if the bunkers are privately owned, the land above them could still be under different ownership.

Thirdly, it could’ve been included as part of the land package sold to South Wales Land Developments (SWLD) by RIFW. SWLD now have outline plans to build houses on some of that land, but nothing in relation to the woods.

There’s also the outside chance that it could be owned by a combination of all of the above, plus Dwr Cymru (due to working reservoirs near the woods) and possibly even Network Rail or other private owners.

Until the issue of ownership and responsibility are cleared up, it’s effectively a no-man’s land where the local authority can’t do anything about it and miscreants will keep coming back again and again.

Then there’s the issue of what to do with the woods once ownership is resolved.

I’m going to presume the owners of  8X’s 3 and 4 aren’t going to open them as a tourist attraction any time soon, but it might be worth considering – like the amusingly signposted “Secret Nuclear Bunker“ at Kelverdon Hatch in Essex. I’ll bet history enthusiasts in the Bridgend area would be more than willing to support such a project.

The woods themselves could, with some work, be converted into a locally-adopted woodland park. The site itself is quite substantial as you can see from the image earlier. With proper hard standing, more people might be encouraged to use it and that will discourage anti-social behaviour – similarly to what Brackla Community Council have done with Tremains Wood. The problem there is money and expertise, obviously. I don’t know if there are any grants the community council or BCBC can access to get work going.

It might also be worth pushing for Section 106 conditions for any new housing or retail developments in the area, like those proposed near Shepherds Vets and A4061.

As for the drug dealing issue – not wanting to make too much of a political/ideological point on something that’s clearly annoying Brackla residents – but if drugs could be bought and sold legally, properly taxed and regulated this problem wouldn’t happen.

Until we reach that enlightenment, the hut-builders are committing a crime and local residents deserve a proper response from those in charge of the land.