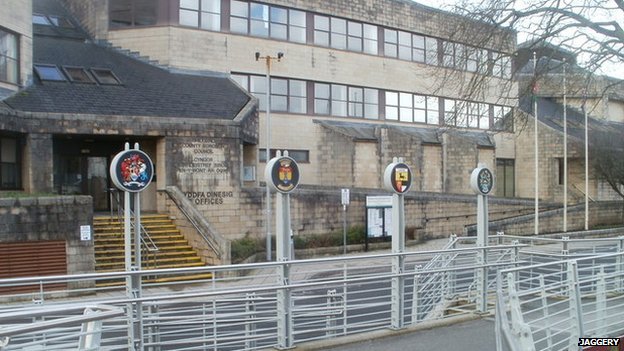 Last week, the Welsh Government released the latest annual report (pdf) on the performance of Wales’ 22 local authorities. Caebrwyn has covered where Carmarthenshire stands, while Plaid Wrecsam has highlighted areas where Wrexham Council are under-performing.

I covered the first report for 2010-11, but as we’re now roughly half-way through the current local government term, it’s worth taking stock and determining how Bridgend Council are performing compared to its peers.

There’s good news in there for BCBC, and they’ve clearly made modest improvements on 2010-11 in certain areas like road conditions.Clearly something’s going wrong with fly-tipping, and it’s not a surprise that some parts of Bridgend are considered unsafe after dark.

The finding that should disappoint Bridgend councillors and officers the most is the first one. Only Neath Port Talbot residents (ironic considering what’s coming up later) are less satisfied with how their council delivers services.

I don’t know why as – to be honest – I’ve never really had much of a problem with how the council delivers services, but I’m not really in need; it might be different for those reliant on such services.It’s also right to say certain parts of the county – like Porthcawl and the Ogmore Valley – have a strained relationship with the council because they’ve made some very unpopular decisions down the years.

It might come down to openness. I’m willing to bet that better communication correlates with greater satisfaction. BCBC have social media accounts now, but their website is – to be frank – crap; it’s also very hard to find out how councillors vote or what they say and things like minutes of meetings are slow to update.

Bridgend is an incredibly officer-led authority – perhaps more so than Carmarthenshire and that’s saying something! There doesn’t appear to be anything in the way of open debate and things are almost always rubber-stamped.

We’re fortunate though that, instead of having a Bryn Parry-Jones or a Mark James (Welsh local government’s Sepp Blatter) in charge, Darren Mepham’s worse excess is making use of the acoustics in the Angel Street HQ’s attic with his saxophone….or so I’m told.

All this is before adding that Bridgend has one of the highest council tax rates in Wales.

What also stands out is that although the original indicators have only been in place a few years, the Welsh Government have already chopped and changed them. This makes true year-on-year comparisons very hard and verges on rendering the whole exercise useless.

Following on from the development proposals at the Rhiw car park (Rhiw Redevelopment Plans Unveiled), a planning application has been submitted to demolish Bridgend Council’s Sunnyside offices (next to the Magistrates Court) and develop an 80 en-suite room care home, potentially creating up to 80 skilled and unskilled jobs.

Over the last few years, BCBC have consolidated their office functions on fewer sites – namely the Angel Street headquarters and Ravens Court near the Brewery Field. The Sunnyside offices – which mainly house/housed the social services department – has been deemed surplus to requirements and was put on the market last year.

The plans outline that the current office building will be demolished, and a new three storey extra care home will be built in its place. The main access will be off Glan-y-Parc.

In addition, the road access to Ty Ardd (Registry Office) will be upgraded to include drop off points for the Magistrates Court. The plans indicate a “Phase 2” on the car park to the north of the building – though it’s unclear what would go there at present.

As some of you might’ve heard, last week, six Bridgend councillors were suspended by the ruling Labour group for voting against (or abstaining on) a merger with the Vale of Glamorgan in an extraordinary council meeting back in November 2014 (Case for Bridgend-Vale merger outlined).

Aside from the aforementioned Labour rebels, only Cllr. Malcolm James (Plaid, Llangynwyd) voted against from the opposition. Former Labour councillor, Luke Ellis (Ind, Pyle), also voted against.Maesteg probably considers itself as much a part of Port Talbot’s catchment area as Bridgend’s, and ties between the two towns have always been close, so it’s not a shock that some Llynfi Valley councillors voted against a Vale merger.

In addition, Maesteg Town Council voted against “Bridgevale”, while there were also concerns over both the impact on Objective One funding and a failure to consult properly before the extraordinary meeting.

The Public Services Minister, Leighton Andrews (Lab, Rhondda), has put a stake through the heart of “Bridgevale”, so to punish the councillors after that fact seems vindictive. I’m presuming the suspension is because they must’ve defied the party line – which always results in a punishment – but I’ve got to say this is excessive by Bridgend Council’s standards.

Bridgend’s Labour group is normally well-disciplined and public rebellions are rare (mainly because there’s no sizable opposition); although this hints all is not well in the local party.Add to this the recently-reported “lock out” of Bridgend Town councillors – including Bridgend Mayor, Bob Burns – from BCBC’s discussions on the future of Bridgend town centre and it all has a touch of the Carmarthenshires about it.

It also stresses the importance of live broadcasts, as the results of the recorded vote were only put on BCBC’s website in January – a good six weeks after the meeting!