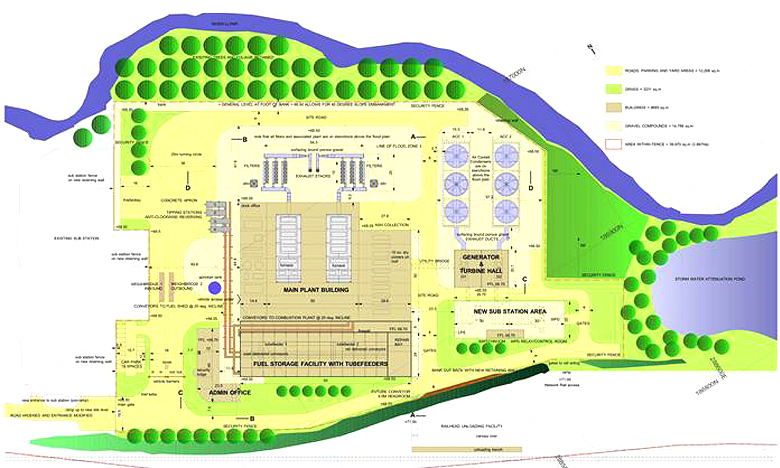 A new biomass power plant off the A4063 near Coytrahen (between Tondu and Maesteg for the unfamiliar) has been recommended for approval by Bridgend councillors – subject to a Section 106 agreement. A link to the monthly planning report is here.

The reason planning officials gave to recommend approval is because the plant “complies with Welsh Government aims in delivering sustainable development and reducing carbon emissions” and will “make a significant contribution to the provision of sustainable energy generated within Bridgend County Borough.”

The 25MW plant would use imported woodchips (from Latvia or North America apparently) and is estimated would power more than 50,000 homes. The plans are highly controversial in the local community and have met fierce resistance, illustrated by the number of objections listed in the monthly report – including written objection from Bethan Jenkins AM (Plaid, South Wales West).

It’s estimated around 20 jobs would be permanently created at the plant (not including construction jobs).

Although I’m not a fan of “nimbyism”, I don’t think anybody would want a power station built near them. Personally I’ve been on the fence about this proposal. We need more sustainable forms of energy in the coming decades but the fact that the woodchips will be imported, transported by road (until a rail head is built) and – ultimately it’s just burning wood – doesn’t make this some ultra-green “sustainable” project.

Network Rail believe a rail upgrade is possible before the plant becomes operational so that’s a bit of good news I suppose. Until then woodchips will arrive at Newport Docks and be transported by road.

The Environment Agency will still have to issue a permit, but the appraisal says that the carbon footprint of the new plant (between 0.091kg KWh- 0.11kg KWh) will be significantly less than UK standards set by DEFRA (0.54 kWh).

The Section 106 agreement requires the developers contribute to improvements to the A4063, restrict output capacity to 50% of maximum until a rail head is built and only use a Class 66 locomotive (which is quieter).

There are also 36 other conditions.

According to the Glamorgan Gazette the application was approved by Bridgend Councillors, but there was a “fierce debate” and strong opposition from Cllr. Mel Winter (Ind. Aberkenfig) and Cllr. Bob Burns (Ind. Oldcastle) in particular.