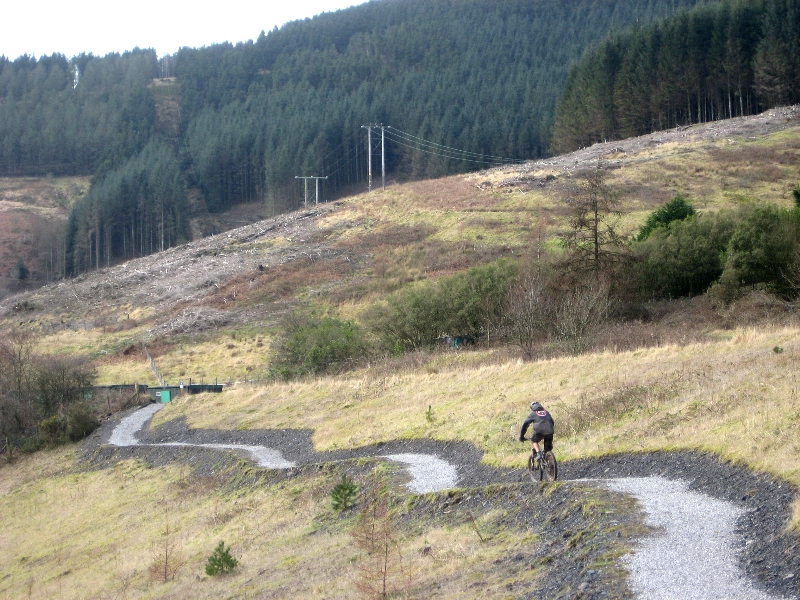 Update 21/02/2013: I realise I’ve been getting a lot of interest here. As the Clerk to Garw Valley Community Council has noted in the comments section, the mountain bike trails are now open. They’re located off Railway Terrace, Blaengarw. There are visitor facilities available in the nearby park.

Garw Valley Community Council have put in a planning application for an upgrade to existing mountain bike paths in the Darren Fawr woodland at Blaengarw. The plans are for three trails totalling 8km graded “blue” for intermediate skilled mountain bikers and “black” for expert mountain bikers.

Visitors would be served by the existing visitor centre at Parc Calon Lan, which in itself is a large reclamation scheme on the site of the former Ocean Colliery.

I’m critical of community councils. I struggle to see what the point of them is most of the time and believe their functions should be folded into larger councils to create scale. However, Garw Valley Council are an example of one that takes ownership and pride in their community. This is exactly the kind of project I would expect other valley community councils to be thinking of.

In the recent Index of Multiple Deprivation, the Blaengarw and Pontycymmer wards have stayed amongst the lesser-deprived council wards, not only in Bridgend county but compared to most of the south Wales valleys. Considering the Bridgend Valleys – especially the Garw and Ogmore – are often overlooked, as well as the Garw being one of the more rural south Wales valleys, this is quite an achievement. No doubt thanks in part to the efforts of the community council.

The plans mirror, and would compliment, existing trails in the Afan Valley – widely regarded as amongst the best mountain bike trails in Europe.

Not wanting to stray too far off topic, but the Olympic organising committee missed a trick in deciding to host mountain biking events at an artificial course in Essex instead of the Afan Valley. A point raised numerous times before I’m sure. For all the debate about Team GB and diverting money from other causes, it’s this particular decision, in my opinion, that’s let Wales down.

A note of caution though. The Afan Valley might well be the template for attracting activity tourism and other tourist related activities, however, despite having globally recognised mountain bike trails, the investment has never followed. Plans for a tourist resort near Cymer are on-off, and there’s still a dearth of tourist facilities in Glyncorrwg – and more importantly – a dearth of jobs. The Afan Valley persistently remains amongst the most deprived parts of Wales.

Initiatives like Valleys: Heart and Soul of Wales and Leanne Wood’s (Plaid, South Wales Central) Greenprint for the Valleys are great. They semi-acknowledge that the kind of labour-intensive industry and grant-funded foreign investment that kept the Valleys afloat since the 1930’s is going to have to be replaced with community enterprise, environmental improvements, improved skills, greater self-reliance and self-confidence/resilience. That doesn’t always have to mean wind farms, it means good stewardship and ownership of the forested areas that could become one of Wales’ great green assets.

Mountain biking is a fantastic sport and health activity and Wales has a great – and often ignored – cycling heritage. We shouldn’t only be encouraging pan-valley mountain bike trails, walks and the associated tourist facilities. We should also remind the people living there that they have a potentially fantastic place to bring up an active young family and these facilities are as much for them as for visitors.

Schemes like this one in the Garw are essential for transforming the Valleys from often-portrayed decaying and depressed post-industrial wastelands, into more dynamic, environmentally conscious communities. Places that people will be proud to call home in addition to being a mini-Switzerland on our doorstep.